Update Required To play the media you will need to either update your browser to a recent version or update your Flash plugin.
Daniel Schearf
February 27,2016


CHISINAU, MOLDOVA— A financial crisis in Moldova, one of the poorest countries in Europe, has exposed deep-rooted corruption that is boosting pro-Russia parties and threatening Moldova's stability.

Monthslong protests around government buildings have raised comparisons with the uprising in neighboring Ukraine. Western backers are withholding financial support until the government makes much-needed reforms, but vested interests are slowing progress and exploiting geopolitics.

Protesters in front of Moldova's government building collect signatures calling for snap elections, direct election of the president and stripping lawmakers of immunity. 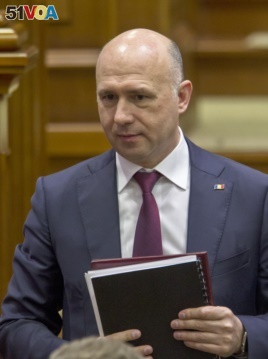 They say the government is corrupt and controlled by influential oligarchs, a charge Prime Minister Pavel Filip denies in an exclusive interview with VOA.

"We have sound minds. We wouldn't take on this responsibility if someone from the shadows would be controlling and capturing the state," he said.

But he admits the need to take action to regain public trust.

"Polls also show that people's support level is very low, which means that if we have snap elections now, many of these parliamentary groups would not find themselves in the future parliament," Filip said.

Moldova was plunged into crisis after $1 billion — one-eighth of the GDP — disappeared from banks.

"We see that there is really now a need to turn the country around and get the reforms done," said Pirkka Tapiola, European Union ambassador to Moldova. "Because without that, the country will not be able to deliver to its citizens what they deserve and what they expect."

Protest camps established last September raised comparisons with Ukraine's uprising, though all sides are so far showing restraint. Pro-Russia parties are gaining support as some exploit Moldova's flirting with the West.

"It's really not about the Russians here. The Russians are not the problem. The problem is domestic," said U.S. Ambassador to Moldova James Pettit. "The problem is homegrown. That doesn't mean that there aren't external powers who might take advantage or who might prefer to see one result over another result. But, again, we do not want to intervene in the internal affairs of Moldova."