More Aid for the Congolese People

Update Required To play the media you will need to either update your browser to a recent version or update your Flash plugin.
By VOA
Apr 24, 2018


The humanitarian crisis in the Democratic Republic of Congo is one of the worst in the world. Thirteen million people in the DRC are in need of humanitarian assistance; at least 4.5 million have been displaced; more than 7 million face severe food insecurity; and two million children are at risk of starvation. 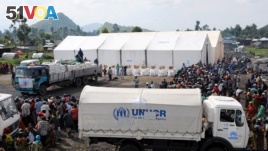 Although the country is rich in natural resources, the causes for the catastrophic humanitarian situation are manifold, stemming from persistent insecurity driven by the activities of armed groups and ethnic tensions in several regions. The political impasse resulting from delayed elections has also undermined state authority, and risks increased violence and unrest. While elections alone will not solve the DRC's many challenges, they are critical to ensuring a democratic and peaceful transition, averting violence, and strengthening democratization, stability, and economic development.

International donors recently convened in Geneva for a United Nations conference aimed at helping to relieve the suffering of the Congolese people. The response was encouraging, with pledges offered of $528 million dollars. U.N. Emergency Relief Coordinator Mark Lowcock said he was pleased with the progress made toward the $1.7 billion funding goal for DR Congo. “And I am even more pleased,” he said, “that...there are additional pledges that governments are working on.”

The United States is providing nearly $67 million dollars in additional humanitarian assistance to provide food, shelter, heath care and other urgent aid for vulnerable Congolese and refugees. State Department Spokesperson Heather Nauert noted that the United States “is the largest single donor supporting this humanitarian response. With the new announcement,” she said, “we are providing nearly $277 million dollars since Fiscal Year 2017 in critical assistance to the people in need in the DRC and for Congolese refugees in the region.”

Ms. Nauert urged more donors to provide resources to help those suffering in the DRC, and she called on the Government there “to take steps to address the underlying causes of insecurity that have given rise to the displacement and conflict that have fueled the humanitarian crisis.”

She welcomed the pledges from other donors at the Geneva conference, which, at a half a billion dollars, was on par with the entire amount raised in 2017. “Eight countries more than doubled their support,” she noted, “and major pledges came in from the United States, the EU, the United Kingdom, Belgium, Sweden and Canada. So we thank those countries for their assistance.”