Update Required To play the media you will need to either update your browser to a recent version or update your Flash plugin.
By VOA
Jan 20, 2018


In July 2015, at the behest of Iraqi Prime Minister Haider al-Abadi, and with the support of the Global Coalition to Defeat ISIS, the United Nations Development Programme established the Funding Facility for Stabilization, or FFS. USAID provided the initial outlay of $7 million, and since then, 23 donors have contributed over $507 million in funding.

The goal was to meet the immediate needs of Iraq's civilian population as ISIS–held areas were liberated, and to create conditions that would allow the return of those who had fled the violence. This is a herculean effort. It means clearing land mines left by ISIS, repairing or rebuilding critical infrastructure such as electricity, water and sewage systems, and rehabilitating schools, health centers and municipal buildings. It means employing youth to remove rubble, opening transport routes, and revitalizing the city. 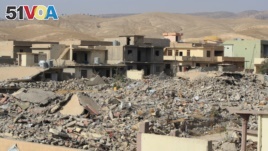 Funding will help rebuild in minority communities such as Sinjar.

But as is common with such difficult tasks in such complex security environments, they take place only as security conditions allow and focus on areas where they can do the most good for the most people. Because of these challenges, thousands of displaced Iraqis, including Christians, Yezidis and Sunni Muslims, continue to struggle rebuild their lives.

Last July, the United States pledged $150 million to FFS. The money would be transferred in two payments of $75 million, but the second delivery was to be contingent on the U.N. Development Programme completing enhancements in the stabilization fund's accountability and transparency.

In an effort to hasten relief to northern Iraq's minorities, the United States has announced that $55 of the $75 million for the UN's Funding Facility for Stabilization will be allocated for projects in minority communities in the Ninewa Plains and Sinjar.

"The U.N. still gets some of its money for this,” said State Department Spokesperson Heather Nauert. “But we will look for other avenues in which to more efficiently fund these types of religious minorities so that they can eventually return back home."