Update Required To play the media you will need to either update your browser to a recent version or update your Flash plugin.
By VOA
Jun 3, 2018


On May 8th, health officials in the Democratic Republic of the Congo, or DRC, reported two confirmed cases of Ebola in the country's northwest. It is the DRC's ninth outbreak of the disease since the discovery of the virus near the country's Ebola River, and the second since the largest-ever Ebola epidemic swept across West Africa from 2014 to 2015.

Ebola is a viral hemorrhagic fever with average mortality rates ranging from 25 to 90 percent, depending on the specific strain. According to the World Health Organization, by the end of December 2015, the epidemic that devastated West Africa sickened 28,616 people and killed 11,310 across 10 countries. 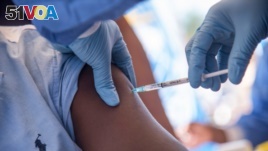 Nurses working with the World Health Organization administer the Ebola vaccine to a local doctor at the town all of Mbandaka on May 21, 2018.

Ebola is a disease of the thick forest, where people and wild animals exist in close proximity. Here, people are more likely to eat bush-meat, or wild-caught game that may be infected with the disease. That is one of the reasons why Ebola is endemic in the DRC, meaning it is always present there at some level.

Since the earliest cases of this outbreak were reported in the DRC's forested region of Bikoro, they have spread to Mbandaka, a major port city. There is now a possibility that the infection could travel down the Congo River to more densely populated areas such as Kinshasa, the capital, with its population of 10 million.

On May 22nd, U.S. Secretary of Health and Human Services Alex Azar announced that the U.S. Agency for International Development, or USAID, will contribute up to 7 million dollars at this stage to combat the Ebola outbreak in the DRC. This is in addition to the 1 million dollars USAID committed a few days earlier to help prevent the spread of this deadly disease.

The United States is also sending a team of public health experts to join the efforts of the Ministry of Health of the DRC, the World Health Organization, and other partners.

At the same time, we call on the global community to make funding available immediately to support the Government of the DRC and the World Health Organization's health emergencies fund - the "Contingency Fund for Emergencies" - in order to contain the outbreak as soon as possible before it spreads further and harms more people.