Update Required To play the media you will need to either update your browser to a recent version or update your Flash plugin.
By VOA
Dec 1, 2017


The Administration of President Donald Trump has ratcheted up pressure on North Korea, in a continuing effort to get the rogue country to abandon its illegal nuclear and missile programs, and to cease its support of terrorism.

On November 20th, the United States re-designated North Korea as a state sponsor of terror, almost a decade after it was removed from the list by the Administration of George W. Bush. The country had previously been added to the list of state sponsors of terrorism in 1988. 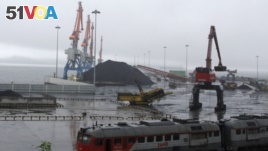 Coal brought from Siberia are be seen awaiting loading onto a ship bound for China in the North Korean special economic zone of Rason. "These designations include companies that have engaged in trade with North Korea cumulatively worth hundreds of millions of dollars," said President Trump.

This is a critical step that should have been taken a long time ago, said President Trump:

“In addition to threatening the world by nuclear devastation, North Korea has repeatedly supported acts of international terrorism, including assassinations on foreign soil. This designation will impose further sanctions and penalties on North Korea and related persons, and supports our maximum pressure campaign to isolate the murderous regime.”

Just one day later, on November 21st, the U.S. Treasury Department's Treasury's Office of Foreign Assets Control imposed another round of sanctions on North Korea, designating one Chinese individual, 13 entities and 20 boats.

“As North Korea continues to threaten international peace and security, we are steadfast in our determination to maximize economic pressure to isolate it from outside sources of trade and revenue while exposing its evasive tactics," said Treasury Secretary Steven Mnuchin. "These designations include companies that have engaged in trade with North Korea cumulatively worth hundreds of millions of dollars. We are also sanctioning the shipping and transportation companies and their vessels that facilitate North Korea's trade and its deceptive maneuvers."

Those persons and entities that have been designated are blocked from holding U.S. assets. Any assets they hold that are within reach of the United States will be frozen. In addition, all U.S. citizens are prohibited from doing business with them.

“The North Korean regime,” said President Trump, “must be lawful, must end its unlawful nuclear and ballistic missile development, and cease all support for international terrorism.”