Update Required To play the media you will need to either update your browser to a recent version or update your Flash plugin.
Ray McDonald
December 16,2015


We’re counting down the five most popular songs in the Billboard Hot 100 Pop Singles chart, for the week ending December 19, 2015.

‘Twas the week before Christmas, and all through the chart, not a song was stirring…at least not in the Top Five.

Number 5: The Weeknd "The Hills"

The Weeknd spends another week in fifth place with “The Hills.” It seems you’re not truly a star until somebody sues you for copyright infringement. It just happened to The Weeknd: the Hollywood Reporter says Cutting Edge Music Limited is suing The Weeknd and his producers for allegedly stealing the bassline from a song called “The Revolution.” It’s in the soundtrack for a film titled The Machine. 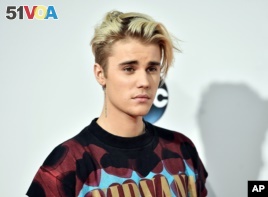 Justin Bieber arrives at the American Music Awards at the Microsoft Theater on Nov. 22, 2015, in Los Angeles.

Number 4: Justin Bieber "What Do You Mean?"

Meanwhile, down in Australia, Justin Bieber is encountering opposition of a different sort. Bieber treads water in fourth place with “What Do You Mean?” Australian radio network Triple J has opened voting for its annual Hottest 100 poll and acting manager Meghan Loader says she’s on the lookout for campaigns that undermine the voting.

Last year, Taylor Swift was thrown out of contention after her fans trolled the poll and Meghan doesn’t want Justin’s fans to follow in their footsteps.

Up at number three, Drake holds tight with “Hotline Bling.” We’re only two weeks away from the new year – do you know where you’ll be on December 31? Drake will be in Miami, performing at the E11even nightclub. General entry tickets are going for $300 apiece but are probably sold out.

Drake isn’t the only star to welcome 2016 in Miami: Pitbull, The Weeknd, and Questlove from The Roots will also be in town.

Justin Bieber retains the runner-up position with “Sorry,” and he’s just added a European leg to his upcoming tour. Justin kicks off the North American leg of his world tour on March 9, 2016 in Seattle, Washington, and this week he also added dates in Europe and the U.K. It starts on September 14 in Berlin, Germany, and as of now ends on November 25 in Lisbon, Portugal.

Adele has a tour in the works as well, but record sales alone are enough to keep her soaring above the competition. Her 25 album is also number one, but that doesn’t begin to tell the story: it just roared past the five million-seller mark here in the United States. It’s only the 11th album since 2005 to hit that sales milestone…and it got there in a mere three weeks!

Will we see any changes next week? There’s only one way to find out: join us in seven days!