Moving the Kosovo-Serbia Relationship Ahead

Update Required To play the media you will need to either update your browser to a recent version or update your Flash plugin.
2014-12-14

On December 9, the newly constituted Kosovo Assembly voted in a new governing coalition, ending the lengthy period of government formation since the June elections. U.S. Secretary of State John Kerry, in a statement, congratulated Kosovo on the constitution of its Assembly and formation of its government, the first democratic transition of political authority since independence resulting from free and fair elections in all of Kosovo’s territory. 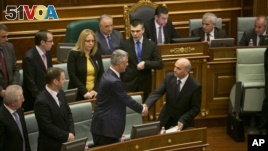 This coalition government, and the process that led to its formation in accordance with Kosovo’s laws and constitution, demonstrated the resilience and vitality of Kosovo’s democratic and political institutions.

Secretary Kerry applauded President Jahjaga for her steadfast leadership in ensuring that the transition accurred in accordance with Kosovo’s laws and constitution. The Secretary also congratulated Prime Minister Isa Mustafa and his new cabinet and pledged support as they confront the many challenges that face Kosovo and the region.

These challenges include normalization of relations with Serbia and Kosovo’s commitment to establish a Special Court to handle allegations investigated by the Special Investigative Task Force. Secretary Kerry also stressed the importance of the new government working inclusively to support all of Kosovo’s communities, and to seriously address the issue of corruption.

“We look forward to continuing our close cooperation with Kosovo on a common agenda that advances Kosovo’s political and economic development and Euro-Atlantic integration.”

With a new government in place in Pristina, the United States looks forward to renewed, high-level efforts toward full implementation of the April 2013 agreement to normalize relations between Kosovo and Serbia.

Sustaining momentum in the Belgrade-Pristina Dialogue is integral to the work of building inclusive, multiethnic democracy in Kosovo, to improving the welfare of its people, to both Kosovo and Serbia’s progress on their respective paths toward European integration, and to a stable, peaceful, and prosperous region.