Update Required To play the media you will need to either update your browser to a recent version or update your Flash plugin.
By VOA
Oct 30, 2017


The U.S. and its international allies and partners are taking new steps to ensure that President Donald Trump's “vision for a world that is secure against terrorist threats is realized,” said U.S. Coordinator for Counterterrorism Nathan Sales in a recent interview.

One of those steps is the recent endorsement with partners of the Global Counterterrorism Forum of the “Antalya Memorandum” on the protection of soft targets. 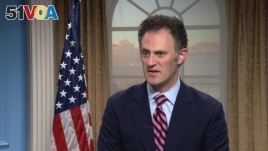 “The Anatalya Memo contains a number of practices for governments and private-sector entities to use together in cooperation to protect places to which the public is invited – stadiums, restaurants, parks, sidewalks - against terrorist threats. This is an increasing trend that we're seeing overseas - we're seeing it here at home - so it's important for us all to work together to secure our public spaces against terrorist attacks.”

The United States, in partnership with Morocco, also recently announced the launch of a new initiative to address the growing threat posed by homegrown terrorists.

“We've seen in the past three years a number of foreign terrorist fighters who've traveled to Iraq and Syria to fight with ISIS, some of whom have come home and perpetrated deadly terrorist attacks,” said Ambassador Sales, “But that's not the only threat we face.”

“We also have to be mindful of people who are inspired by ISIS or inspired by Al-Qaeda. They may not have a membership card. They may not have any battlefield experience. But it doesn't take much more than simply renting a truck and driving it into a crowd. So the threat of homegrown terrorism -- people without any operational ties -- is a very serious problem. It's a threat that's on the rise and it's one that we're going to be focusing on.”

The United States and Global Counterterrorism Forum partners are also focusing on strengthening criminal justice and other rule of law institutions that confront terrorism.

“We're doing the same sort of thing,” said Ambassador Sales, “standing up these capabilities with partners around the world.”