Update Required To play the media you will need to either update your browser to a recent version or update your Flash plugin.
By VOA
Jan 13, 2018 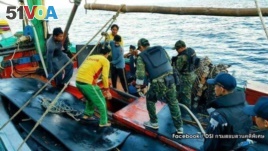 No country in the world is immune to human trafficking. It is happening in every corner of the globe – in people's homes, in factories, in hotels, on farms, on fishing vessels; in countless places where one might not expect it. Human trafficking also happens in the United States. This means that if we are to fight this scourge, we must begin at home. That is why January is declared, by Presidential proclamation, National Slavery and Human Trafficking Prevention Month.

President Donald Trump continued that tradition stating in his proclamation that “Human traffickers prey on their victims by promising a life of hope and greater opportunity, while delivering only enslavement. Instead of delivering people to better lives, traffickers unjustifiably profit from the labor and toil of their victims, who they force — through violence and intimidation — to work in brothels and factories, on farms and fishing vessels, in private homes, and in countless industries”.

The President further emphasized that “During National Slavery and Human Trafficking Prevention Month, we recommit ourselves to eradicating the evil of enslavement. Human trafficking is a modern form of the oldest and most barbaric type of exploitation. It has no place in our world. This month we do not simply reflect on this appalling reality. We also pledge to do all in our power to end the horrific practice of human trafficking that plagues innocent victims around the world.”