A New Day Needed in Cuba

Update Required To play the media you will need to either update your browser to a recent version or update your Flash plugin.
By VOA
Apr 28, 2018


In his address to the United Nations General Assembly in September, President Donald Trump said that the Cuban government “is delivering only anguish and failure to its people.”

The State Department's recently published 2017 report on human rights conditions in Cuba describes the Cuban regime's lack of respect for the rights of the Cuban people. 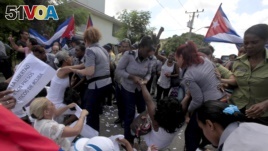 Members of The Ladies in White, an opposition group are detained from Cuban security personnel. (File)

Freedom of expression was limited to “expression that ‘conforms to the goals of socialist society,' with strict censorship, punishing even distribution of the Universal Declaration of Human Rights.”

The Cuban government controlled all forms of media. The internet was restricted, as were academic freedom and the rights of assembly and association. Government-organized mobs were used to assault and disperse those who assembled peacefully.

Earlier this month, Raul Castro, who took over as Cuba's leader from his brother Fidel in 2006, stepped down from the presidency, handing the presidential baton to his designated successor and longtime Communist party official Miguel Diaz-Canel. Could this transition possibly mean an end to the human rights abuses described by the State Department and endured for decades by the Cuban people?

At a press briefing, State Department Spokesperson Heather Nauert pointed out that “Cuban citizens had no real power to affect the outcome of this undemocratic transition process.” The United States, she declared, is “disappointed that the Cuban Government opted to silence independent voices and maintain its repressive monopoly on power, rather than allow its people a meaningful choice through free, fair and competitive elections.

“Cuba's new president should take concrete steps to improve the lives of the Cuban people, to respect human rights and to cease repression and allow greater political and economic freedoms,” said Spokesperson Nauert, “We urge the new president to listen and respond to Cuban citizens' demands for a more prosperous, free, and democratic Cuba.”