A New Day at the United Nations

Update Required To play the media you will need to either update your browser to a recent version or update your Flash plugin.
By VOA
Sep 24, 2017

The nations pledged support for Secretary-General Antonio Guterres' reform agenda, calling for reform in the pillars of peace and security, development and management reform. They signed a ten-point declaration committing to strong partnerships in this matter and stronger collaboration in mandate delivery overall. 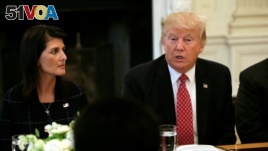 “We seek a United Nations that regains the trust of the people around the world. In order to achieve this, the United Nations must hold every level of management accountable, protect whistle-blowers and focus on results rather than on process.”

The ten-point plan called for a reduction in redundancy throughout and across the United Nations system and greater transparency and predictability in its planning and budget functions.

The declaration also called for concrete changes in the United Nations system to better align its work on humanitarian response, development, and sustaining peace initiatives.

“To honor the people of our nations, we must ensure that no one and no member state shoulders a disproportionate share of the burden, and that's militarily or financially. We also ask that every peacekeeping mission have clearly defined goals and metrics for evaluating success.”

“We pledge to be partners in your work,” said President Trump. “And I am confident that if we work together and champion truly bold reforms, the United Nations will emerge as a stronger, more effective, more just, and greater force for peace and harmony in the world.”

The U.S. hopes to bring the United Nations to complete consensus on these goals and calls on some 70 remaining member states to sign the declaration, said Ambassador Haley.

“In the coming weeks and months, we will be considering the Secretary-General's broader vision. This is an opportunity for all of us to seize this moment and ensure that the United Nations remains relevant. ... Let's make it a new day at the United Nations.”