Update Required To play the media you will need to either update your browser to a recent version or update your Flash plugin.
William Eagle
April 17,2015


International health officials say just two capsules a day of Vitamin A reduces the chance of a child dying by 22%. Children without iodine lose 13 IQ points and stay one year less in school. Efforts to promote child health support vitamin and mineral supplements to rectify the problem. They also support breast-feeding and foods fortified with health-enhancing nutrients. But many high-impact programs are under-funded.

The new Power of Nutrition fund aims to change all that. The new effort will help mobilize one billion dollars for nutritional programs at scale by 2020.

The initiative now has $55 million from the British philanthropy, the Children’s Investment Fund Foundation. It will leverage at least another $100 million from the International Development Association, part of the World Bank. 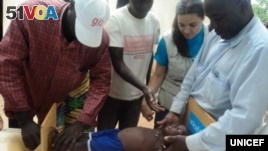 Health workers in Cameroon monitor the growth of infants and find that the growth of one-third of those children are stunted because of poor nutrition. (Courtesy UNICEF)

Other high profile contributors include the UBS Optimus Foundation ($26 million) and the UK’s Department for International Development, or DFID ($47 million). The World Bank and UNICEF will offer matching funds. They will multiply by five or six times every dollar in private contributions.

Michael Anderson, the CEO of the Children’s Investment Fund Foundation, says the Power of Nutrition will appeal to traditional and non-traditional donors.

"We’re launching today arrangements to unlock the first $200 million of the one billion dollars of that [goal]," he said. "The way [the leveraging of the money] will work is that to get to a billion we start with raising another $150 million more from private and non-traditional funders. That $150 million will be doubled by the Power of Nutrition fund to $300 million."

"So, we’ll match money raised from non-traditional donors with new matching funds from public funders, including DFID, which has been an anchor funder in this and a stalwart supporter. That $300 million is then multiplied again to $600 million to $900 million, depending on if it goes through UNICEF or the World Bank.UNICEF has promised to double funds contributed by new donors and [as for the World Bank], this will bring in money that will help mobilize IDA," he said.

The funding could be used by countries like Tanzania, which coordinates nutritional aid programs among nine ministries. Saada Mkuya Salum, the country’s minister of finance, said Tanzania has reduced stunted growth in children by up to three percent a year with an effort that has political support from the grass roots to the presidency.

"We [are] trying to improve increase food fortification platform with wheat, flour and edible oil, " she said. "We strive to ensure that domestic resources are injected into nutrition [programs]. Our population growth is high at three percent, so there is a lot of potential to support nutrition and by 2025 to become a middle income country. "

Experts say good health is crucial to boosting development and economic growth. They say countries in Africa and Asia lose up to 11 percent of their economic output from the effects of poor nutrition. On the other hand, experts say good nutrition results in children growing up to lead healthy, productive lives, with a good chance of becoming high wage earners.

Tanzania’s minister of finance says her country’s efforts to improve child nutrition are now only receiving about 25% of the funding they need. Without the new Power of Nutrition initiative launched this week, says Salam, the dream of Tanzania progressing to middle income status will not become a reality.