Update Required To play the media you will need to either update your browser to a recent version or update your Flash plugin.
By VOA
Aug 9, 2017

Ambassador Haley thanked all who voted in favor of the resolution, in particular China, noting their "critical role" on "matters related to North Korea."

"This resolution," she said, "is the single largest economic sanctions package ever leveled against the North Korean regime." It could cut North Korea's exports by a third, costing Pyongyang about $1 billion in revenue.

Indeed, the North Korean regime forces their citizens to work in mines and factories in order to fund its illegal nuclear and ballistic missile programs. Even as the regime continues to ask for international assistance to cope with devastating floods and a possible drought later this year, its displays of aggression take precedence over the well-being of its own people. 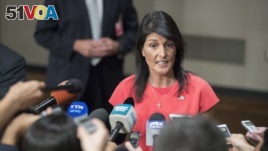 U.S. Ambassador to the United Nations Nikki Haley speaks to reporters after a Security Council vote on a new sanctions resolution that would increase economic pressure on North Korea.

While the latest sanctions are a significant step forward, Ambassador Haley warned that the threat of an outlaw nuclearized North Korean dictatorship remains.

Ambassador Haley urged all Security Council members to fully implement the new and previously imposed sanctions. "Our goal," she said, "remains a stable Korean peninsula, at peace, without nuclear weapons. We want only security and prosperity for all nations including North Korea."

Until then, this resolution and prior ones must be implemented to the fullest to maximize pressure on North Korea to change its ways.