Update Required To play the media you will need to either update your browser to a recent version or update your Flash plugin.
By VOA
Jun 14, 2018

They were designated under Executive Order 13694, “Blocking the Property of Certain Persons Engaging in Significant Malicious Cyber-Enabled Activities” as amended, and Section 224 of the Countering America's Adversaries Through Sanctions Act, known as CAATSA. 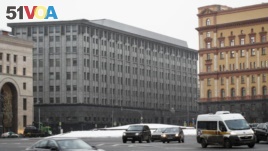 Assets Control also designated several entities and individuals for being owned or controlled by, or acting for or on behalf of, the three entities that have enabled the FSB.

“The United States is engaged in an ongoing effort to counter malicious actors working at the behest of the Russian Federation and its military and intelligence units to increase Russia's offensive cyber capabilities,” said Treasury Secretary Steven Mnuchin in a statement on June 11. “The entities designated today have directly contributed to improving Russia's cyber and underwater capabilities through their work with the FSB and therefore jeopardize the safety and security of the United States and our allies.”

The FSB itself was previously designated under CAATSA Section 224 for engaging in activities that undermine the cybersecurity of individuals and entities on behalf of the Russian government.

“The United States,” Secretary Mnuchin wrote, “is committed to aggressively targeting any entity or individual working at the direction of the FSB whose work threatens the United States and will continue to utilize our sanctions authorities, including those provided under CAATSA, to counter the constantly evolving threats emanating from Russia.”