Update Required To play the media you will need to either update your browser to a recent version or update your Flash plugin.
By VOA
Mar 2, 2018

“This action targets the deceptive shipping practices that have enabled the Kim regime to fund its dangerous weapons programs,” said Secretary Mnuchin. “Our actions target shipping and trade companies, vessels, and individuals across the world who we know are working on North Korea's behalf. Specifically, we are sanctioning 27 entities, 28 vessels, and 1 individual, all involved in sanctions evasions schemes.” 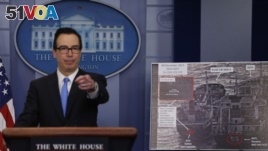 The additional sanctions are part of the maximum pressure campaign to cut off sources of revenue that Kim Jung-un derives from prohibited trade to fund his nuclear and ballistic missile programs.

The U.S. is also issuing a global shipping advisory to put everyone on notice of North Korea's illicit maritime tactics and underscore the significant sanctions risk of engaging in maritime business with North Korea. The U.S. will continue to shine a spotlight on the practices employed by the government of North Korea to falsify identifying information on ships and conceal illicit cargo.

Companies and countries across the world are now on notice that the United States views compliance with U.S. and U.N. sanctions as a national security imperative. “Those who trade with North Korea do so at their own peril,” said Secretary Mnuchin.

The United States will leverage its economic strength to enforce President Donald Trump's directive that any company that chooses to help North Korea fund its nuclear and ballistic missile programs will not be allowed to do business with anyone in the United States.

Kim Jong-un's nuclear program serves one goal: to keep him in power, even as his people starve and suffer. The United States will not sit idly by while he threatens American allies and territories.

The United States is committed to complete, verifiable, and irreversible denuclearization of the Korean Peninsula. And these latest sanctions against those who continue to fuel this rogue regime, strengthens American resolve to achieve that end.