Update Required To play the media you will need to either update your browser to a recent version or update your Flash plugin.
By VOA
Sep 26, 2017


The State Department has designated Tony-Lee Thulsie and Brandon-Lee Thulsie as Specially Designated Global Terrorists for their ties to ISIS. The designation imposes strict sanctions on foreign persons determined to have committed, or pose a significant risk of committing, acts of terrorism that threaten the security of Americans or the national security, foreign policy, or economy of the United States. 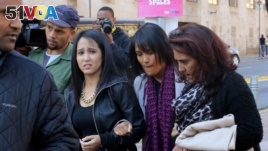 These designations notify the U.S. public and the international community that Tony-Lee Thulsie and Brandon-Lee Thulsie have committed or pose a significant risk of committing acts of terrorism. Terrorism designations expose and isolate entities and individuals, and deny them access to the U.S. financial system. Moreover, designations can assist the law enforcement activities of U.S. agencies and other governments.

These designations are part of a comprehensive U.S. strategy to defeat the terrorist threat, wherever it lurks.