Update Required To play the media you will need to either update your browser to a recent version or update your Flash plugin.
By VOA
Sep 27, 2017 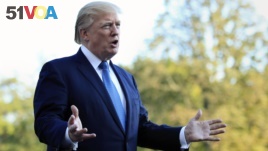 President Donald Trump speaks to reporters upon his return to the White House in Washington, Sunday, Sept. 24, 2017.

The government in Venezuela is uncooperative in verifying whether its citizens pose national security or public safety threats; fails to share public safety and terrorism-related information adequately; and has been assessed to be not fully cooperative with respect to receiving its nationals subject to final orders of removal from the United States. Accordingly, the entry into the United States of certain Venezuelan government officials and their immediate family members as nonimmigrants on business, tourist, and business/tourist visas is suspended.

Chad, President Trump noted, was added to the list despite its government being an important counterterrorism partner, because its government is not able at this time to adequately share public safety and terrorism-related information. Accordingly, the entry into the United States of nationals of Chad, as immigrants, and as nonimmigrants on business, tourist, and business/tourist visas, is suspended.

Iran, Libya, Syria, Yemen and Somalia were left on the list of affected countries in the new proclamation issued by the president. But restrictions on citizens from Sudan were lifted.

Iraqi citizens will not be subject to travel prohibitions because of the close cooperative relationship between the United States and the democratically elected government of Iraq.

Citing security, President Trump made clear his reasons for issuing the new travel restrictions in a Tweet, "Making America safe is my number one priority. We will not admit those into our country we cannot safely vet."