The Next Stage of Fighting ISIS

Update Required To play the media you will need to either update your browser to a recent version or update your Flash plugin.
By VOA
Mar 5, 2018


Through the efforts of the Iraqi armed forces, the Syrian Democratic Forces and the Global Coalition to Defeat ISIS, ISIS has been defeated in Iraq, and nearly so in Syria. Its self-proclaimed capitals have fallen and its false caliphate is no more. But that does not mean that the terrorists group and its vicious ideology are no longer a threat to the global community.

“As we defeat ISIS on the battlefield, the group has adapted to our success,” said Ambassador-at-Large and Coordinator for Counterterrorism Nathan Sales at the recently-held International Conference on Mobilizing Law Enforcement Efforts To Defeat ISIS. 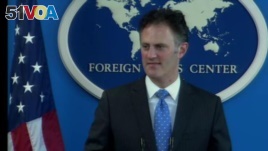 “The fight is by no means over – it's simply moving into a new phase. Battle-hardened terrorists are heading home from the war zone or wreaking havoc in third countries. Homegrown terrorists – people who are inspired by ISIS but have never set foot in Syria or Iraq – are carrying out attacks.”

And that means that in most cases, the brunt of the effort to keep the terrorists in check is shifting away from the military and toward civilian measures, including law enforcement, intelligence sharing, diplomatic engagement, messaging, and foreign assistance.

Many of the counterterrorism steps the global community is already taking in this direction are enumerated in UN Security Council Resolution 2396, which was adopted in December. These measures include a watchlist of known and suspected terrorists; information sharing, including of passenger name records; prosecutions of fighters returning from the battlefield and those inspired by ISIS; and designations to cut off the flow of money to terrorist organizations and their members.

In addition, each country should take advantage of INTERPOL's databases that will fill in the gaps in domestic watchlists.

All countries should enact laws that cover and penalize a wide range of terrorist activity. These are the tools prosecutors need to handle the next phase of the ISIS threat.

And finally, all countries must develop the necessary legal regimes to designate and sanction terrorists, thus allowing the global community to cut off their financing.

“My hope,” said Ambassador Sales, “is that this conference will help us focus our attention on achieving the enduring defeat of this depraved terrorist organization– as well as al-Qa'ida and self-directed terrorists who are inspired by these groups.”