Update Required To play the media you will need to either update your browser to a recent version or update your Flash plugin.
By VOA
Apr 29, 2018


Peaceful demonstrations in Nicaragua turned violent, when police and pro-government groups cracked down on protesters, reportedly leaving at least 26 dead. Protesters were initially exercising their right of freedom of assembly to protest President Daniel Ortega's proposed reforms of the social security system.

According to the Committee to Protect Journalists, at least nine journalists have been injured since the demonstrations began and at least two have had their equipment stolen. Meanwhile, multiple independent television networks that were covering the events were temporarily blocked from transmission, and one remains off the air. 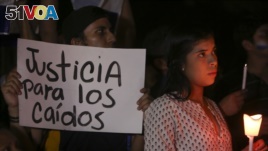 The United States government regrets the loss of life and injuries suffered in Nicaragua during protests by its citizens. “We condemn the violence and the excessive force used by police and others against civilians who are exercising their constitutional right to freedom of expression and assembly,” said State Department spokesperson Heather Nauert.

Amnesty International called on Nicaraguan authorities to “stop repressing demonstrators and protect their right to protest.”

Erika Guevara-Rosas, director of Amnesty International in the Americas, said, “The authorities' crude and violent response to these demonstrations has deeply troubling implications for human rights in Nicaragua.”