Update Required To play the media you will need to either update your browser to a recent version or update your Flash plugin.
William Eagle
March 13,2015


Each election cycle, Nigerian officials introduce new ways to ensure a clean vote. This year, everyone registered to cast a ballot will carry a government-issued permanent voters card (PVC) with biometric data that includes an individual’s fingerprints. They will be processed by electronic card readers programmed to operate in a particular polling booth.

The machines will confirm the identity of the voters, helping ensure that each person registered casts only one ballot.More than 130,000 card readers will be deployed throughout the country.

Some opposition candidates have gone to court to ban the readers, saying they violate a 2010 law that prohibits certain types of voting technologies. 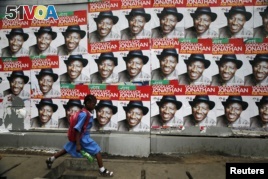 A schoolgirl walks past campaign posters in support of Nigeria's President Goodluck Jonathan along a road in Ikoyi district in Lagos, Feb. 13, 2015.

"The card reader is not used for voting directly," he explained. "It’s just to confirm that the person who turns up to vote actually is [the owner of the card]. What the electoral act prohibits is electronic voting to indicate [a voter’s] choice on the ballot. That [isn’t happening] in Nigeria, and I do notsee the use of the card reader as violating a provision of the Electoral Act."

Others say card readers made errors when used in elections in Ghana and Kenya. INEC says it has corrected those glitches. And recent tests have revealed few problems.

Still there are doubts. Clement Nwankwo, the executive director of the Policy and Legal Advocacy Center in Abuja, said "A major concern is that if the card readers are being operated by battery, how long will they last? If they only last a certain period of time and there’s no electricity in some areas, they can not be charged."

In past elections during power black-outs, INEC has allowed voters to cast ballots after bringing some form of identification and signing an affidavit.

Nwankwo said those manually counting the votes at the polling booths will compare the number of ballots cast with the number of registered voters recorded by the card readers.

Darren Kew is also concerned about the counting process. He’s an associate professor of conflict resolution at the University of Massachusetts in Boston and the director there of the Center for Peace, Democracy and Democratic Development. He’s also monitored all of Nigeria’s democratic elections since 1999.

Kew said Nigeria’s system for collating the votes is decentralized and unnecessarily complicated, leaving room for manipulation in previous elections.

He said the vote tallies from the polling booths are forwarded to collation centers at the ward level and later to the local level. From there, they go to state centers and finally to INEC at the federal level. At each point the votes are examined and counted.

Kew said past experience shows the vulnerabilities of the system:

"We’d follow [vote tallies presented] to the ward collation centers, and things usually look pretty good, but then the sun goes down," he explained.

"International monitors for security reasons are usually not allowed to be out overnight and the local monitors [were] often prevented from getting in to the local government collation centers. That’s where we would see a lot of [numbers] change. The next morning when we [went] to observe [the counting] at the state level those numbers would change very surprisingly to us -- to an extent where we would see outcomes that did not seem to makes sense with what we saw the day before," said Kew.

The elections were postponed from February 14 until March 28 because of insecurity in at least three northeastern states, and also because INEC had not finished distributing millions of voting cards.

In some cases, INEC says it has distributed the cards to local officials, though some voters are still waiting to receive them. Kew says he concerned there could be a reason for the delay.

"The problem with voting cards," he said, "is that INEC will release them but the voters themselves will not get them. There seems to be some evidence as in the past that these are being hoarded at the local government level."

He said if the cards are not distributed, the vote in some areas is effectively suppressed. In the past – they were distributed to others who voted fraudulently under someone else’s name. Or, they were used to indicate a high voter turnout to support high and fraudulent vote totals that were added on at the local government collation centers during the night.

Kew said the chair of the electoral commission, Professor Attahiru Jega, has worked to make the voting process more transparent, and to curb potential abuse. Jega is an academic and also former labor leader, not affiliated with any party. But Kew says that’s not true of other INEC commissioners, or those on the state level. They are all appointed by the president.

"Professor Jega is surrounded by a lot of individuals – some of whom definitely have direct or indirect relationships to the ruling party and all of whom owe their seats to the president and may not show the same level of independence that Professor Jega has tried to show," said Kew. "That creates a spectrum of other opportunities if the ruling party decides it wants to try to shift the elections. It could turn to these individuals for assistance."

He said vote rigging may be more difficult this time around.

He said the opposition is large enough to have monitors at the polls, while youth corps volunteers have been recruited as polling station managers. Kew said they are part of a federal program made up of college graduates who are perceived to be idealistic, and less prone to corruption.

Any complaints of cheating will be investigated by INEC, and if necessary, by the courts. They have overturned many legislative and gubernatorial elections over the years because of rigging and other irregularities.

General Buhari, who has run for president three times since 1999, has complained in prior elections to the courts about irregularities. They frequently ruled against him. And, they’ve said that alleged levels of fraud were never enough on the national level to overturn a presidential election.

This time, he says, he’ll find some other way to press his case.