No Significant Steps to Fight Trafficking in Iran

Update Required To play the media you will need to either update your browser to a recent version or update your Flash plugin.
By VOA
Jul 10, 2017


An estimated 20 million people around the world are victims of the heinous crime of human trafficking. This year, the State Department's Trafficking in Persons report places particular focus on the responsibility of governments to hold offenders accountable.

At the release of the 2017 report, U.S. Ambassador-at- Large to Monitor and Combat Human Trafficking Susan Coppedge noted how important the role of government is to the fight:

“When governments enact and enforce strong, comprehensive anti-trafficking laws, they send an unmistakable message to criminals: We will not tolerate this. Traffickers, not their victims, should and will face punishment.”

All governments must do more to combat trafficking, Ambassador Coppedge said. But a certain number are making little or no effort to do so. Twenty three have been listed as a “Tier 3” country, in which the government fails to meet even minimum standards for the elimination of trafficking. The Islamic Republic of Iran is one of them. 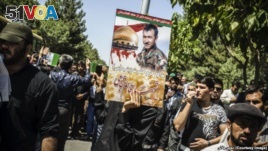 Iran sends Afghan refugees to fight for the Syrian Government in Syria.

Iran, the State Department says, remains a source, transit and destination for men, women and children subjected to sex trafficking and forced labor, and the Iranian government made negligible efforts to address its extensive trafficking problem.

No anti-trafficking law enforcement efforts were reported, and government officials themselves continued to be complicit in trafficking crimes, including the coerced recruitment and use of Afghan men for combat in Syria, and the funding of militias in Iraq that recruited and used child soldiers.

The report also pointed out the extreme difficulty for female victims of trafficking to obtain justice in Iran, since the courts accord legal testimony by women only half the weight as testimony by men, and female sex trafficking victims are liable to be prosecuted for adultery, a crime punishable by death.

In his introduction to the report, Secretary of State Rex Tillerson called human trafficking “one of the most tragic human rights issues of our time” - – not only splintering families, but undermining the rule of law, encouraging other transnational criminal activity, and threatening public safety and national security. “But worst of all, he said, “the crime robs human beings of their freedom and their dignity.” That is why every person and every government “must pursue an end to the scourge of human trafficking.”