Update Required To play the media you will need to either update your browser to a recent version or update your Flash plugin.
By VOA
Aug 30, 2017


North Korea has again fired a ballistic missile – this time over Japan's Hokkaido island into the sea, after a flight of nearly 1,700 miles.

While North Korea has conducted dozens of ballistic missile tests under the regime of Kim Jong Un, firing projectiles over mainland Japan is rare. Indeed, of the more than 80 missiles North Korea has tested since Mr. Kim came to power in late 2011, he has not sent any of those missiles over Japan. 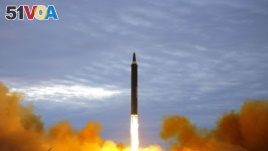 A missile is launched during a long and medium-range ballistic rocket launch drill in this undated photo Aug. 30, 2017.

The highly provocative test came as U.S. and South Korean militaries are conducting annual joint exercises on the Korean Peninsula.

Japanese Prime Minister Shinzo Abe spoke out forcefully against the ballistic missile launch aimed at Japan. “North Korea's reckless action of launching a missile that passed over Japan is an unprecedented, serious and grave threat,” he said.

Secretary of Defense Jim Mattis reaffirmed earlier this month that the United States will defend itself and its allies. “It must be noted that the combined allied militaries now possess the most precise, rehearsed and robust defensive and offensive capabilities on earth,” he said. The North Korean “regime's actions will continue to be grossly overmatched by ours and would lose any arms race or conflict it initiates.”

President Donald Trump rebuked North Korea for its latest provocation saying, “The world has received North Korea's latest message loud and clear: this regime has signaled its contempt for its neighbors, for all members of the United Nations, and for minimum standards of acceptable international behavior.”

“Threatening and destabilizing actions,” said the President, “only increase the North Korean regime's isolation in the region and among all nations of the world. All options are on the table.”