Update Required To play the media you will need to either update your browser to a recent version or update your Flash plugin.
By VOA
Mar 9, 2017

The government subjects citizens to rigid controls over many aspects of their lives, including denial of the freedoms of speech, press, assembly, association, religion, movement, and worker rights. 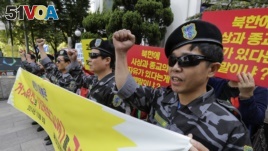 The government operates a network of political prison camps in which conditions are often harsh, life threatening, and include forced and compulsory labor. According to the 2015 Korea Institute for National Unification white paper, the Ministry of State Security administered prison camps, or kwanliso camps. There were reportedly between 5,000 and 50,000 prisoners in each of the five kwanliso.

Reports indicated that conditions in the prison camp and detention system were harsh and life threatening and that systematic and severe human rights abuse occurred. Detainees and prisoners consistently reported violence and torture, and defectors described witnessing public executions in political prison camps.

Numerous defector accounts and non-governmental organization reports describe the use of torture by authorities in several detention facilities.Methods of torture and other abuse reportedly included severe beatings; electric shock; prolonged periods of exposure to the elements; humiliations such as public nakedness; confinement for up to several weeks in small “punishment cells” in which prisoners were unable to stand upright or lie down, among others.

Mothers were, in some cases, reportedly forced to watch the infanticide of their newborn children. Defectors continued to report many prisoners died from torture, disease, starvation, exposure to the elements, or a combination of these causes.

The 2016 White Paper on Human Rights in North Korea, published by the Korea Institute for National Unification and the 2014 UN Commission of Inquiry report stated that officials had in some cases prohibited live births in prison and ordered forced abortions as recently as 2013.