Update Required To play the media you will need to either update your browser to a recent version or update your Flash plugin.
By VOA
May 11, 2018


Preparations for a landmark meeting between President Donald Trump and North Korea's dictator Kim Jong-Un to discuss the denuclearization of the Korean peninsula are ongoing. Success in achieving that goal would, as President Trump has said, be a great achievement for the world. The U.S. has made clear that until North Korea takes concrete, permanent, and verifiable steps to end its nuclear weapons program, sanctions remain in place and the maximum pressure campaign will continue. 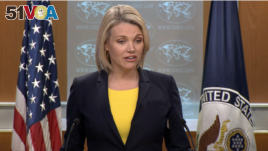 The U.S. has also made clear that it has other grave concerns with North Korea, chief among them the Kim regime's horrific record on human rights.

April 28 to May 5 was North Korea Freedom week, a week organized by NGOs in South Korea as well as the international community to promote the freedom and human rights of North Korean people. State Department Spokesperson Heather Nauert issued a statement on the occasion of North Korea Freedom Week challenging the world not to forget the millions of North Koreans who continue to suffer under one of the most repressive and abusive governments in the world.”

“For more than 60 years the people of North Korea have faced egregious human rights violations in virtually every aspect of life,” Ms. Nauert said. “In addition to the roughly 100,000 individuals, including children and family members of the accused, who suffer in political prison camps, North Koreans face an almost complete denial of fundamental freedoms by their government. Those trying to flee this oppressive environment, if caught, are often tortured or killed.”

The United States, said Spokesperson Nauert, “remain[s] gravely concerned and deeply troubled by these abuses. In tandem with the maximum pressure campaign, we will continue to press for accountability for those responsible. We are also going to continue our efforts to increase the flow of independent information into, out of, and within this isolated state to present everyday North Koreans with a more realistic picture of the outside world.”