Update Required To play the media you will need to either update your browser to a recent version or update your Flash plugin.
By VOA
Jun 9, 2017


There has been a dramatic erosion of constitutional rule in Venezuela over the last 18 months. This includes the undermining of the authority of the democratically elected National Assembly; the thwarting of the recall referendum late last year; the ongoing imprisonment of opposition leaders and members of civil society and other restrictions on individual freedoms, including the use of military tribunals to try civilians; the violent repression of peaceful protests; and, most recently, the effort to hold a constitutional assembly to override the will of the Venezuelan people and erode Venezuelan democracy.. 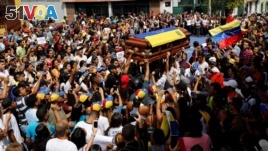 Mourners carry the coffin of Neomar Lander, who died during a protest against Venezuelan President Nicolas Maduro's government, during his funeral in Guarenas, Venezuela, June 9, 2017.

U.S. Under Secretary of State for Political Affairs Thomas Shannon in remarks at the Organization of American States, decried the humanitarian hardships that have overwhelmed a majority of Venezuelans. Economic stagnation has given way to hyperinflation and increasing economic instability. Venezuelan citizens struggle to maintain basic access to most food and medicine.

The United States has condemned the Venezuelan government's violent crackdown against opposition leaders and civil society. In the past two months of protests, more than 60 people have been killed, more than 1,000 injured, and nearly 3,000 detained, including 331 civilians charged criminally by military courts.

Under Secretary Shannon said, "The rights of peaceful assembly and peaceful protest ought to be protected and not repressed."

The U.S. urges the Venezuelan government to fulfill its commitments to promote free elections, respect the independence of the National Assembly, respect the freedoms of all of Venezuela's political prisoners, and meet the humanitarian needs of the Venezuelan people.

The Organization of American States can partner with others in the international community to help bring about a peaceful resolution to the political impasse in Venezuela. The United States supports a proposal for the establishment of a contact group to guide the next stage of diplomatic efforts.

Now is the time for the community of democracies to show the world that inter-American solidarity can help find a path back to peace and prosperity in Venezuela.