If a Climate Agreement is Reached, What Happens Next?

Update Required To play the media you will need to either update your browser to a recent version or update your Flash plugin.
Jane Bojadzievski
November 26,2015


The main expectations from the two-week United Nations Climate Change Conference about to begin in Paris are that the outcome should be a concrete plan with achievable goals from every nation that participates – meaning that by 2025, carbon emissions will be at a much lower level than they are today. But once that agreement is reached -- what will it take to actually implement it?

There is hope in combating the effects of a rapidly warming planet, according to U.S. Congressman Don Beyer, who serves on the Joint Economic Committee and the House Committee on Natural Resources.

“The United States has done more than any other country in the last seven years to reduce its carbon footprint. A lot of other nations around the world are working very hard. I am very optimistic about the Paris talks coming up in just a few weeks. Even the big nuke polluters like China and India are willing to come with plans,” said Beyer.

Still, one of the toughest issues has been financing developing countries to help them develop sustainable energy sources. George Mason University Professor Mona Sarfaty has a possible solution.

“The increase in solar panels photovoltaic cells has been tremendous over the last decade, and come far faster than anybody thought that it would. It’s now less expensive to produce solar energy than it is to produce other types of energy in some places. So what we need to do is to spread that inexpensively produced solar energy, so that there are many more areas that are able to get the energy that they need using either solar or wind – the renewables that are currently available,” said Sarfaty. 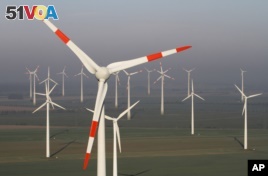 At the same time, financing for poorer nations -- to help them cut greenhouse gas emissions and deal with the fallout of global warming remains one of the biggest obstacles -- even though the gap is narrowing.

Aliya Hag, of the Natural Resources Defense Council acknowledges there is no quick solution.

“Developing nations are the most vulnerable to climate impacts and they need help from the industrialized world, which was responsible for much of the pollution that is causing the warming today. That’s not to say that developing countries don’t need to start reducing their emissions right now, but we do need to find a way to mobilize enough financing to make sure that they are able to build resilience and be prepared for the climate impacts that are already baked into the system,” said Hag.

Still, the reaching of a comprehensive deal in France remains uncertain.