Organization of Islamic Cooperation on Peace Through Education

Update Required To play the media you will need to either update your browser to a recent version or update your Flash plugin.
By VOA
Oct 25, 2016


In mid-October, the foreign ministers of the Organization of Islamic Cooperation member countries met in Tashkent, Uzbekistan to find new ways to promote peace and prosperity, and fight radicalization and reign in violent extremism.

In the belief that education is an important tool to promote peace and economic development and to combat the ideology of terrorism and violent extremism, the dignitaries adopted the theme “Education and Enlightenment: The Path to Peace and Creativity.” To facilitate the process of countering violent extremist ideology online, the Organization also launched the Center for Dialogue, Peace and Understanding.

The ministers adopted the Tashkent Declaration, which, among other goals, strives to promote peace and combat violent extremism by addressing problems caused by under-performing economies and high unemployment, through increased investments in human capital, training and quality education. Such investments should result in a well-educated populace that values and works toward achieving democracy and toward modernizing and improving their home countries. 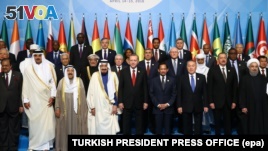 “The theme of this year's ministerial -- education and enlightenment -- appropriately focuses on the solution to many of the ongoing challenges facing OIC members and the international community,” said Acting U.S. Special Envoy to the Organization of Islamic Cooperation, Arsalan Suleman.

“Education and innovation are the currency of the modern global economy. A well-rounded education is what has enabled our global civilization to achieve such great advances in all areas, from technology and health to tolerance and pluralism. It is what helps us break down the mental barriers that divide us.”

“We must work together more closely to jointly address global challenges like the refugee crisis and climate change. We must also recognize the urgent need to enhance global efforts to protect the rights of minorities, including religious minorities,” said Special Envoy Suleman.

“[The United States is] proud of the progress in advancing U.S.-OIC cooperation in a number of areas, including on political crises, humanitarian affairs, health, countering violent extremism, women's rights, entrepreneurship, and human rights. We look forward to working with all of you to further enhance US-OIC partnerships and cooperation.”