Update Required To play the media you will need to either update your browser to a recent version or update your Flash plugin.
Penelope Poulou
January 14,2016


The Academy Awards nominations mark the beginning of the Oscar race. This year, like every year, there are thought-provoking films, new talent and tough competition. And everyone anticipates Oscar night with its glitz and glamour, Hollywood’s most prestigious film awards are also a reminder of the hard work, creativity and courage movie-makers employ to entertain, move and enthrall audiences the world over.

The Academy of Arts and Sciences loves quality, big budget films about real people. The Revenant by Oscar winning director Alejandro Inarritu and cinematographer Emmanuel Lubezki is partially based on a true account. The film explores family ties, and the tenacity of the human spirit in the American frontier. But there is serious competition from other movies.

Spotlight is a tough and thought-provoking film with excellent dialogue, and a riveting cast working with the talented director Tom McCarthy and script writer Josh Singer.

The film slowly and methodically unveils how Spotlight, the investigative team of the Boston Globe newspaper, uncovered the massive scandal of child molestation in Boston’s Catholic Archdiocese and beyond. Like the All the President’s Men in 1976, Spotlight is an ode to the power of a free press to expose corruption at the highest levels of power.

In The Danish Girl, Oscar-winning filmmaker Tom Hooper turns its lens on the struggle of pioneer transgender painter Einer Wegener as he transforms into Lily Elbe in 1920s Copenhagen.

The film highlights the very-contemporary dialogue on gender and sexuality. After his Oscar-winning interpretation as paraplegic Stephen Hawking last year, Eddie Redmayne transforms himself to fragile but brave Lily. His stupendous performance may make him an Oscar winner for two years in a row.

But Redmayne has to compete among others with Leonardo DiCaprio who plays fur trapper Hugh Glass in The Revenant. and Michael Fassbender as Steve Jobs in Danny Boyle's biopic by the same name. Tough picks, but not as tough as the choices in the Leading Actress category. 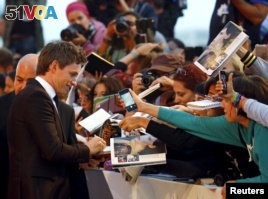 Cate Blanchett is a favorite as Carol, an upper-class lesbian housewife, in Todd Haynes’ romantic drama Carol about a love affair between two women in 1950s New York.

Still, this may be Brie Larson’s year for her role as Ma in the dark film, Room. Larson plays a young, abducted woman who is imprisoned in a windowless room but dedicates her life to her son — a product of rape by her abductor. 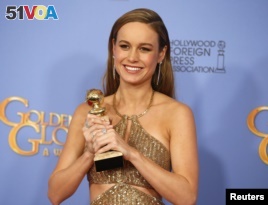 Brie Larson poses with the award for Best Performance by an Actress in a Motion Picture - Drama for her role in "Room" during the 73rd Golden Globe Awards in Beverly Hills, Calif., Jan. 10, 2016.

We would be amazed if we didn't mention Adam McKay’s sleek, dark comedy The Big Short on the housing bubble collapse in the mid 2000, and the cinematic post-apocalyptic epic Mad Max: Fury Road by veteran Mad Max director George Miller.