Update Required To play the media you will need to either update your browser to a recent version or update your Flash plugin.
Jeff Seldin
November 17,2015


WASHINGTON— Top security and intelligence officials are warning the deadly attacks in Paris - claimed by the Islamic State terror group - are likely not a “one-off event.” And fear of more plots in the pipeline is again putting the spotlight on the problem of foreign fighters returning from the battlegrounds of Syria.

With the wounds still raw from Paris and much of Europe on edge, there’s the question that won’t go away – have more foreign fighters returned to the West to wreak havoc in the name of the group known as Islamic State?

In Europe, the challenge is great. 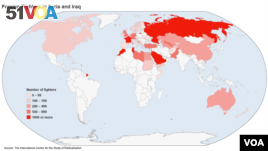 Foreign Fighters in Syria and Iraq

Experts say there’s no single psychological profile for who is likely to become a foreign fighter, let alone come back as part of a sleeper cell.

But some patterns are known: the average male Western foreign fighter is 25. The typical female is 21.

One-third were active in online jihadist forums, and more than 80 percent have joined Islamic State.

Lahur Talabani, intelligence director for the Kurdistan Regional Government in Iraq, thinks the appeal of Islamic State is falling.

“The attraction is not as much as it was at the beginning. For sure we’ve seen this through intelligence. But they may be still attractive to some people,” he said.

U.S. intelligence officials worry that attraction is still substantial – and combined with Islamic State’s flexibility could help the group pull off more attacks in the West.

And there’s precedence -- the brothers who carried out the Charlie Hebdo shootings in Paris in January had ties to al-Qaida, but were also connected to Ahmedy Coulibaly, who died in a shootout at a French grocery store having pledged himself to Islamic State.