Partnering for the Rights of LGBTI Persons

Update Required To play the media you will need to either update your browser to a recent version or update your Flash plugin.
By VOA
Dec 6, 2016


Advancing the human rights of lesbian, gay, bisexual, transgender, and intersex [LGBTI] persons is a key part of the U.S. government's broader advocacy in support of human rights and fundamental freedoms worldwide.

U.S. President Barack Obama has committed to this effort during his administration, appointing the first ever Special Envoy for the Human Rights of LGBTI persons, Randy Berry, in 2015. Special Envoy Berry notes that the promotion of these rights internationally is based on the principles enshrined in the United States' constitution and the Universal Declaration of Human Rights:

“All of our work in this field and in so many others in the human rights field at the State Department is really based on an understanding of what is the promise of equal protection under the law and what equality really means under our constitution ... At the heart of what we're always talking about is not an issue of special rights for this community or any other but really, just an issue of equal rights absent any discrimination based on markers of identity.”

Special Envoy Berry's work has focused on helping communities to help themselves by strengthening key global partnerships that promote the human rights of LGBTI persons around the world. 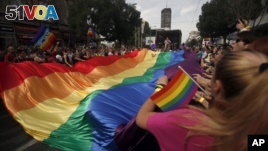 One such partnership, the Equal Rights Coalition, was founded by Uruguay and the Netherlands and is now made up 33 states, including the U.S. The coalition provides a standing platform for governments to consolidate efforts in achieving human rights and enables like-minded governments to more effectively cooperate, share best practices, and discuss common challenges.

The U.S. also supports the Global Equality Fund which joins more than 25 countries and private-sector entities:

“The Global Equality Fund, acting as a public-private partnership, has delivered in excess of $30 million in grants to civil society organizations in more than 50 countries around the world to really just get at the intersection of government and civil society and to just resource some very, very modest work of engagement, of visibility, of creative approaches to protecting the rights of this particular society.

The fund supports civil society actors such as the Sarajevo Open Center -- an organization that is helping the Bosnian government and Bosnian civil society to work together to implement a national action plan on LGBTI inclusion.

Special Envoy Randy Berry, “We're seeing what is truly an organic change at a global level.”