Partnership Between U.S. and European Union

Update Required To play the media you will need to either update your browser to a recent version or update your Flash plugin.
By VOA
Dec 19, 2017


The partnership between America and the European Union is based on shared values, shared objectives for security and prosperity on both sides of the Atlantic, and “we remain committed to that,” said U.S. Secretary of State Rex Tillerson.

With regard to North Korea, the United States and the EU do not accept a nuclearized Korean Peninsula. Political and economic pressure will continue until North Korea reverses its course. 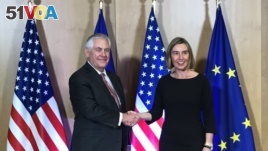 The United States and the EU continue to support the defeat of ISIS not just in Iraq and Syria but globally.

Secretary Tillerson observed that Iran continues to be a source of instability in the Middle East. “We've seen this recently with ballistic missiles being fired from Yemen, which it's our belief are sourced from Iran; their support for the Houthis, and the destabilizing effect that that has in Yemen. We also know of Iran's destabilizing effect of exporting weapons and militia to Syria, an area of conflict, and their ongoing support for Hezbollah, a terrorist organization.”Secretary Tillerson stressed that these “activities of Iran cannot be ignored and cannot go unanswered.”

As a NATO Ally, the United States is pleased to see NATO-EU cooperation continuing to evolve and deepen since the joint declaration was signed last year. “Our security is strongest when allies and partners shoulder their fair share of the burden, and that's why we continue to call on others to increase their defense spending,” said Secretary Tillerson.

The United States and the EU continue to support the peace process in Syria. The United States endorses the resumption of talks in Geneva under the leadership of the UN Representative Staffan de Mistura to chart a new course forward for Syria that will serve the will of the Syrian people.

The partnership between America and the EU is longstanding, said Secretary Tillerson. The enduring relationship illustrates the strong commitment that the United States has to the EU and the important role that the EU plays in promoting peace and prosperity.