Update Required To play the media you will need to either update your browser to a recent version or update your Flash plugin.
By VOA
May 12, 2017


In 1953, then U.S. President Dwight Eisenhower in a speech to the UN General Assembly proposed the “Atoms for Peace” program, including the establishment of what would become the International Atomic Energy Agency, or IAEA, to facilitate the exchange of nuclear technology for peaceful uses and safeguard against their diversion to weapons.

Since that time, the United States has been a leader in international civil nuclear cooperation and the peaceful uses of nuclear energy. It is the single largest contributor to technical cooperation activities of the IAEA, helping Member States apply nuclear technology to address national development needs. The assurances provided by the Nuclear Non-Proliferation Treaty and the safeguards of the International Atomic Energy Agency have helped make today's vibrant exchange of nuclear energy, science, and technology possible. 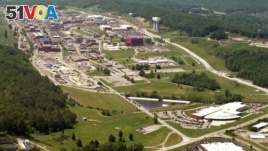 On May 9, the U.S. delegation delivered its statement on the peaceful uses of nuclear energy to the First Session of the Preparatory Committee for the 2020 Review Conference of the Parties to the Treaty on the Non-Proliferation of Nuclear Weapons.

Andrew Schofer, Chargé d'Affaires of the U.S. Mission to International Organizations in Vienna, reaffirmed the U.S. government's $50 million pledge to the Peaceful Uses Initiative for 2015 to 2020 and reported specific progress toward that commitment. Mr. Schofer said in his statement, “The effects [of cooperation] have been real and felt worldwide...We have helped fund important capacity-building efforts to address urgent needs, such as the Ebola and Zika crises, global disparities in access to cancer therapy, transboundary animal diseases and water shortages, food safety and quality, and environmental effects from the Fukushima nuclear incident.”

In addition to supporting such life-saving programs through the IAEA, the United States has 50 partners and 23 agreements on bilateral nuclear cooperation. IAEA States with nuclear power programs can make full use of the international commercial market for nuclear fuel. The United States already operates the American Assured Fuel Supply.

The IAEA has nearly completed the creation of a low enriched uranium reserve to provide another international mechanism to ensure reliable fuel services. Additionally, fuel from such reserves can be made available in the event of a severe supply disruption.

Through programs that facilitate scientific exchange and building partnerships that safeguard against proliferation, the United States and all Member States benefit from peaceful nuclear cooperation, which the Non-Proliferation Treaty helps make possible. In the words of Chargé Andrew Schofer, “States that uphold their nonproliferation commitments should know that they have a strong partner in the United States toward that end.”