Update Required To play the media you will need to either update your browser to a recent version or update your Flash plugin.
By VOA
Aug 18, 2017


Vice President Mike Pence had an important message to deliver to the people of Colombia on his recent visit: "The United States stands with Colombia because our security and our prosperity are inextricably linked. Our interests are aligned. Our values. . .are the same. And the birthright of freedom belongs to both our people."

The Colombian government and the Revolutionary Armed Forces of Colombia, or FARC, last year signed an agreement that ended the longest-running conflict in the Western Hemisphere. Colombia now faces the challenge of consolidating that peace.

The greatest risk to that peace, said Vice President Pence, is "the absence of infrastructure, basic services, the rule of law in war-affected areas that's creating a haven for criminal activities, drugs and violence." The United States will continue to partner with Colombia to address these issues. 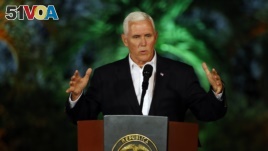 This year marks the 6th year of the U.S.-Colombia Trade Promotion Agreement - an agreement that has created jobs and opportunities in both nations. Colombia is the United States' third-largest trading partner in Latin America, with a two-way goods trade of nearly $27 billion in 2016 alone.

The United States supports Colombia's aspirations to join the Organization of Economic Cooperation and Development. In demonstration of this support, the United States announced it will provide Colombia up to $2 million in technical assistance to achieve that objective.

"In spite of all this progress, our greatest concern," said Mr. Pence, "is the dramatic increase in cocaine production, which has now reached an all-time high in Colombia. This worsening crisis requires swift action to protect the people of both our countries."

The drug trade is a source of violence, crime, and corruption, and victimizes the Colombian people. And in the United States, illegal drugs have poisoned children, torn apart families, and devastated many communities.

The United States will continue to address its demand for illegal drugs with border security, internal enforcement, and a renewed effort to remove dangerous criminals, gang members, and drug dealers from the streets of the United States.

"Colombia," said Vice President Pence, "represents the future of Latin America. It is a future of freedom, security, and prosperity. And America stands with you."