Update Required To play the media you will need to either update your browser to a recent version or update your Flash plugin.
By VOA
Aug 3, 2017


On his recent trip to Estonia, Vice President Mike Pence reiterated America's support for Estonia, Latvia and Lithuania saying, "America stands with the nations and the people of the Baltic States—and always will."

For the better part of the last century, the Baltic nations were occupied by the Soviet Union, which tried to eradicate the identity, traditions, and language of the people of Estonia, Latvia, and Lithuania. Throughout those years of brutal occupation, the United States refused to recognize the Soviet Union's annexation of the Baltic States.

Thirteen years ago, the Baltic States joined NATO. Today, Estonia is one of five nations that meet the NATO benchmark of spending at least 2 percent of GDP on defense. By the end of 2018, Latvia and Lithuania will join Estonia in meeting this goal. 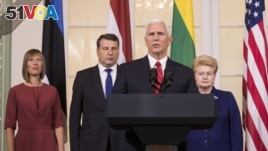 As the U.S. Vice President noted, the "specter of aggression" from Russia still looms large in the region. "At this very moment," said Vice President Pence, "Russia continues to seek to redraw international borders by force, undermine the democracies of sovereign nations, and divide the free nations of Europe one against another."

President Trump has called on Russia to cease its aggression in Ukraine and will continue to hold Russia accountable for its destabilizing actions.

The preference of the United States is a constructive relationship with Russia based on common interests. Russia, too, has said that it would like to normalize relations with the United States. But the President and Congress are unified in their message: A better relationship and the lifting of sanctions will require Russia to reverse the actions that caused sanctions to be imposed in the first place.

Be assured, said Vice President Mike Pence, "The United States rejects any attempt to use force, threats, intimidation, or malign influence in the Baltic States or against any of our treaty allies." The United States will stand firmly behind its collective defense obligations under NATO's Article 5.

As President Trump made clear in Poland, the fight "begins with our minds, our wills, and our souls." If we steel our minds, strengthen our wills, and refresh our souls, "the West will never, ever be broken. Our values will prevail. Our people will thrive, our civilization will triumph."