Pence on Prosperity of the Americas

Update Required To play the media you will need to either update your browser to a recent version or update your Flash plugin.
By VOA
Apr 20, 2018


At the first Summit of the Americas, member states issued a Declaration of Principles, in which this body agreed to work together to advance the prosperity and democratic values, as well as institutions and security in the hemisphere.

“The United States,” said Vice President Mike Pence in a speech at the Summit of the Americas, “is proud to stand with free nations across this hemisphere in pursuit of these noble goals.”

The Western Hemisphere, said the Vice President, was always meant to be a hemisphere of freedom. As the charter of the Organization of American States declares, "the historic mission of America is to offer... a land of liberty."

“Like the citizens of your nations,” said Vice President Pence, “the people of the United States seek a future of opportunity and prosperity. That's why, in America. . .we've been unleashing our boundless natural resources, and quite recently President Trump signed the largest tax cuts and tax reform in American history.” 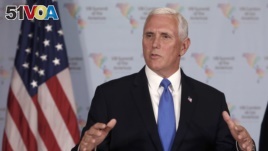 The U.S. has already taken action to reach new deals and update existing agreements. Indeed, the United States is working very closely with Canada and Mexico to modernize the North American Free Trade Agreement. “We believe we are fairly close to a deal, and we're going to be working earnestly to make that a reality for all of our nations,” declared Vice President Pence.

All these steps, said Vice President Pence, “will strengthen the prosperity for the people of the United States, and strengthen prosperity across this region.”