Pence on Winds of Change in Middle East

Update Required To play the media you will need to either update your browser to a recent version or update your Flash plugin.
By VOA
Jan 24, 2018


On a recent trip to the Middle East, Vice President Mike Pence visited Egypt, Jordan, and Israel. In his remarks to a special session of the Knesset, Vice President Pence stated that in meetings with Israeli Prime Minister Benjamin Netanyahu, Egyptian President Abdul Fattah al-Sisi, and King Abdullah of Jordan, they discussed the remarkable transformation that is taking place across the Middle East and the need to forge a new era of cooperation.

“The winds of change can already be witnessed across the Middle East,” observed Vice President Pence. “Longstanding enemies are becoming partners. Old foes are finding new ground for cooperation. And the descendants of Isaac and Ishmael are coming together in common cause as never before.”

The Vice President reminded attendees that President Donald Trump, when addressing leaders at the Arab Islamic American Summit held last year in Saudi Arabia, challenged the people of the region to “work ever closer together, to recognize shared opportunities and to confront shared challenges.”He further noted that the President urged all who call the Middle East their home to "meet history's great test -- [and] conquer extremism and vanquish the forces of terrorism together."

Together with its partners and allies, the U.S. will continue to drive radical Islamic terrorism from the face of the earth. Thanks to the courage of partner security forces supported by the U.S. and its allies, at this very moment ISIS is on the run, and their so-called caliphate has crumbled. 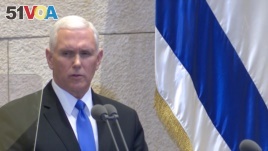 As President Trump made clear in Saudi Arabia, the U.S. will continue to work with all of its partners to starve, "terrorists of their territory, their funding, and the false allure of their craven ideology."

The United States will also help persecuted peoples, who have suffered greatly at the hands of ISIS and other terrorist groups. The United States has already committed more than $110 million to assist Christian and other religious minorities across the wider Middle East. And the U.S. urges its allies -- here in Israel, in Europe, and across the world -- to join in this cause.

“Let's work together,” said Vice President Pence, “to restore the rich splendor of religious diversity across the Middle East, so that all faiths may once again flourish in the lands where they were born.”