Update Required To play the media you will need to either update your browser to a recent version or update your Flash plugin.
By VOA
Mar 24, 2018


A recent survey, supported by the U.S. President's Emergency Plan for AIDS Relief, or PEPFAR, shows that for as many as one in three girls, their first sexual experience is forced or coerced, which also places them at an elevated risk for HIV infection.

Statistics also show that almost 1,000 young women are newly infected with HIV on a daily basis, and that they are up to 14 times more likely to be infected with HIV compared with young men. PEPFAR is committed to changing these statistics, especially with its DREAMS partnership that helps girls develop into Determined, Resilient, Empowered, AIDS-free, Mentored, and Safe women. 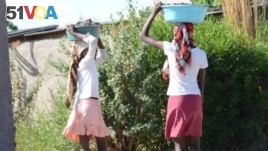 Through this public-private partnership, the United States is empowering young women to become change agents for themselves, their peers, and their communities. “We are inspiring and assisting them to write their own success stories about how they stayed in school, benefited – along with their families – from economic strengthening, and addressed sexual- and gender-based violence,” said Ambassador Deborah Birx who serves as the U.S. Global AIDS Coordinator and U.S. Special Representative for Global Health Diplomacy.

The U.S. government has invested more than $750 million in DREAMS programs to reach over 2.5 million adolescent girls and young women with services and support. In the 10 original DREAMS-supported countries, nearly two-thirds of the highest-HIV-burden communities achieved a 25 to 40 percent or greater reduction in new HIV diagnoses among young women, with new infections declining in almost all DREAMS intervention districts.

There is still a long way to go. Millions of girls and young women experience physical and sexual violence every year.This violence often starts early in life. So PEPFAR is expanding its developmentally appropriate HIV and violence prevention programming for girls ages 9-14 to prevent sexual violence; delay becoming sexual active; help them understand consent; and encourage them to make healthy choices.

“This year, as we mark PEPFAR's 15 Years of Saving Lives through American Generosity and Partnerships,” said Ambassdor Birx, “we celebrate the important progress we have helped girls and young women make through our work in more than 50 countries.”