Update Required To play the media you will need to either update your browser to a recent version or update your Flash plugin.
Joe DeCapua
December 04,2014


The African Wildlife Foundation has announced a $10 million fund to quickly target poachers. The Urgent Response Fund aims to reduce the killings of thousands of endangered elephants and rhinos every year.

The AWF said in the 1970s, Africa was home to more than 1.3 million elephants. That figure has plummeted to about 419,000 today. Elephants are now being killed at the rate of 35,000 a year. Rhino numbers are also dwindling. South African officials said more than 2,000 have been killed in the last two years alone. Giraffes and lions are fairing very poorly, as well.

Craig Sholley, the organization’s vice president for philanthropy and marketing, said, “It’s just really, really important for people to recognize that this is a serious problem. There’s a possibility that we could lose elephants within the next 20 years. The same is true of rhinos and certain populations of lions and cheetah and gorillas and chimpanzees.”

He said that the Urgent Response Fund will be used in targeted ways. 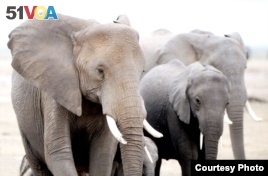 The African Wildlife Foundation said about 35,000 elephants are killed every year by poachers. (Credit: AWF)

“We’ve got three different categories and they’re relatively simple. The categories are Stop the Killing, Stop the Trafficking and Stop the Demand. Stop the Killing is all about addressing the poaching on the ground in targeted areas in Africa. Category two is all about stopping the trafficking. Finally, as far as Stop the Demand is concerned the big markets are in Asia – China, Hong Kong, Thailand, Vietnam. We’re working with a partner WildAid to create public awareness and behavioral change.”

The AWF and WildAid are creating celebrity public service announcements or PSAs. Sholley said such radio and TV spots helped to sharply reduce the demand for shark fin soup.

“We hope to do the same as far as ivory and rhino horn is concerned,” he said.

The strategy calls for the training and use of sniffer dogs at key wildlife product smuggling points – airports and seaports in Kenya, Tanzania, Ethiopia and the DRC. The organization has underwritten the purchase of a helicopter to patrol a private reserve near South Africa’s Kruger National Park.

The $10 million from the AWF will support the Urgent Response Fund for three years. And Sholley said there’s no red tape or bureaucratic hang-ups.

“That’s what’s really exciting about this. Governments like the United States, Great Britain and China [have] stepped-up with funds that are similar -- $10 million. We’re talking about the largest economies in the world. And AWF has effectively stepped-up with the same amount. They do have to go through a certain bureaucracy in terms of ensuring that the funds are going to be funneled to appropriate parties on the ground,” he said.

The African Wildlife Foundation is a non-profit organization founded in 1961 with headquarters in Kenya.