Pompeo on Negotiations With North Korea

Update Required To play the media you will need to either update your browser to a recent version or update your Flash plugin.
By VOA
Jul 10, 2018 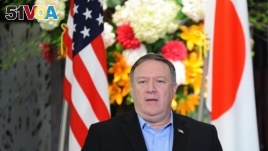 In addition, said Secretary Pompeo, “North Korea agreed to meet in mid-July in Panmunjom to discuss the repatriation of remains of our American service members. North Korea also reaffirmed its earlier commitment to destroy its missile engine test site, which will make the region and the world safer. We also established a working-level team that will carry out the day-to-day work of our two sides.”

Secretary Pompeo noted that “the road ahead will be difficult and challenging. . ..But our allies, like the Republic of Korea and Japan. . .believe that peace is worth the effort. . . .As allies we share and are committed to the same goal – the fully verified, final denuclearization of North Korea, as agreed to by Chairman Kim Jong-un.”

The future is promising for North Korea if it gives up its nuclear weapons. Should North Korea follow through on its commitments, said Secretary Pompeo, “we look forward to eventually helping North Korea obtain prosperity and earn the respect of the world; however,” he warned, “North Korea will first have to fulfill its commitments to denuclearize.”

Until then, sanctions will remain in place. Multiple UN Security Council resolutions unanimously passed require all nations to fully enforce those sanctions, stressed Secretary Pompeo. Japan, South Korea, and the U.S. “will continue to be vocal in reminding each country of its obligations to do so.”

“There is also no change to our ironclad commitment to the defense of our allies, the Republic of Korea and Japan,” reaffirmed Secretary Pompeo. “The security of our allies is integral to our American security.”

The United States looks forward to continuing its close coordination with Japan and South Korea to achieve the successful implementation of the agreement that was achieved at the Singapore summit.