A new test can quickly identify a common and dangerous condition during pregnancy, and help keep mothers and babies healthy and safe.

When Jessi Prizinsky was pregnant with her first child, her feet started swelling.

“Well, you hear, everybody tell you, you know, the swollen ankles, and get your feet up and all that,” Prizinsky said. “That was where I thought, ‘OK.’ And then it started to be, it kind of looks like it’s in my arms and hands, too.”

Most women expect some swelling when they are pregnant. But these symptoms can also be signs of preeclampsia. 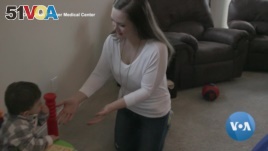 A new test can quickly identify a common and dangerous condition during pregnancy and help keep mothers and babies healthy and safe.

That’s a complication of pregnancy that raises the mother’s blood pressure and affects the blood flow to the placenta. This can lead to smaller or premature babies. Untreated, it can be fatal to mom, or baby, or both.

“One of the hard parts with preeclampsia is there’s a lot of symptoms of just pregnancy alone, and other medical conditions that have similar symptoms that the women experience, like high blood pressure, headaches, changes in vision. Those can be attributed to a lot of other things,” Rood said.

Preeclampsia is more serious if it occurs earlier in the pregnancy, or in a woman who had high blood pressure before getting pregnant.

Dr. Rood says managing this condition early on is best for both mothers and babies.

“Without the certainty of this test aiding in the diagnosis,” she said, “we as providers are definitely overcautious, as this is definitely something we don’t want to miss because of the life-threatening results of a misdiagnosis for moms and babies.”

Listen to your body

Because of her preeclampsia, Prizinsky was induced three weeks early. She had a successful second pregnancy and has this advice for other women.

“The biggest thing is listening to your body,” she said.

The test is so easy, women can take it at home, that way preeclampsia can be treated as soon as it develops. The researchers expect the test to be approved by the Food and Drug Administration in the next few years.