Update Required To play the media you will need to either update your browser to a recent version or update your Flash plugin.
By VOA
Jan 2, 2018


The U.S. Embassy in Phnom Penh announced this month that the Cultural Heritage Center for the Bureau of Educational and Cultural Affairs (ECA) of the U.S. Department of State has awarded $350,000 from the Ambassadors Fund for Cultural Preservation to World Monuments Fund (WMF) for Phase 5 of the conservation of the 10th‐century temple of Phnom Bakheng at Angkor Park.

Cambodia is one of the nine locations – including Bolivia, Burma, the West Bank, Mexico, Moldova, Nepal, Sierra Leone, and Thailand – that received support in FY 2017 for the preservation of ancient and historic sites through the U.S. Ambassadors Fund for Cultural Preservation Large Grants Program. 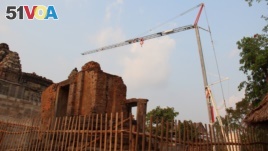 Parts of Phnom Bakheng temple in Cambodia's Siem Reap province are under construction as part of the conservation project.

Phnom Bakheng is Angkor's oldest temple and one of the world's greatest architectural treasures. Since 2008, the Phnom Bakheng conservation project has focused on the structural stabilization and waterproofing of the east half of the central temple, while incorporating site management and training activities.

Phase 5 of the project will advance and complete the restoration of the east half of the pyramid according to a restoration design that has been elaborated and fine-tuned in earlier phases of the project. The intervention will reinstate the temple's original structure and water management system by using both traditional and modern materials.

Since 2004, World Monuments Fund has received over $3.2 million to preserve the Phnom Bakheng temple from the U.S. government. World Monuments Fund is the leading independent organization devoted to saving the world's most treasured places. For over 45 years, its highly skilled experts have applied proven and effective techniques to preserve important architectural and cultural heritage sites around the globe.

The U.S. is proud to work with its partner Cambodia, to help preserve the priceless cultural treasures of the Cambodian people.