Update Required To play the media you will need to either update your browser to a recent version or update your Flash plugin.
By VOA
Nov 9, 2017


"Our nations share an enduring bond," said President Donald Trump on his recent visit to Japan. America and Japan face many challenges and many opportunities, "but we will be facing them together, in friendship and as allies," said the President.

The most dangerous threat remains the aggressive nature of the North Korea regime. Kim Jong-Un has continued to develop North Korea's unlawful weapons programs, including illegal nuclear tests and outrageous launches of ballistic missiles directly over Japanese territory. The regime, said President Trump, is a "threat to the civilized world and international peace and stability."

"We will not stand for that," said President Trump. "The era of strategic patience is over."

President Trump noted the tragic stories of Japanese young people whom North Korea has abducted over the years. "No child," he said, "should ever be subjected to such cruelty."

President Trump also decried the barbaric murder of the young American college student Otto Warmbier, at the hands of the North Korean regime. "It's a horrible story," he said. "And we can't let that happen."

The United States of America stands in solidarity with the people of Japan against the North Korean menace. History has proven over and over that strong and free nations will always prevail over tyrants who oppress their people. 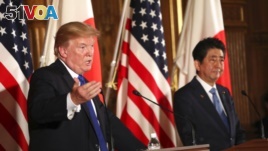 The powerful and enduring U.S.-Japan alliance includes more than 50,000 members of the United States military stationed in Japan. In addition to that, 33,000 are stationed in South Korea. American and Japanese military personnel train together, work together, and will stand together to defend the security and sovereignty of both countries.

America is also committed to improving its economic relationship with Japan. "As President of the United States, I am committed to achieving a fair, free, and reciprocal trading relationship," said President Trump. "We seek equal and reliable access for American exports to Japan's markets in order to eliminate our chronic trade imbalances and deficits with Japan."

"A mutual respect for culture and sovereignty," said President Trump, "will continue to bring the U.S. and Japan closer together, and open up new avenues of cooperation and success.” The U.S. looks forward to working side by side with Japan in military and economic partnership.