Progress Against ISIS and Syria

Update Required To play the media you will need to either update your browser to a recent version or update your Flash plugin.
By VOA
Feb 1, 2017


The United States and its coalition partners continue to make gains in the fight against the Islamic State in Iraq and Syria, or ISIS. 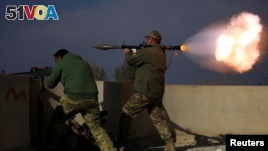 In an "indication of their desperation" to get to the ISIS-controlled area, terrorists are trying to drive their vehicles through a shallow area of the Tigris river, he said. ISIS had previously destroyed the bridges linking the two areas.

The coalition carried out more than 50 airstrikes over the last week in Syria, supporting Syrian Democratic Forces in clearing nearly 30 square kilometers northwest of Raqqa.

The Syrian Democratic forces are clearing the areas of remaining pockets of ISIS terrorists and fortifying their own defenses. Since the operation to isolate the key city of Raqqa began November 5, the Syrian Democratic Forces have cleared more than 3,000 square kilometers and the coalition has conducted nearly 900 precision airstrikes.

These airstrikes, said Spokesperson Davis, "have destroyed more than 100 [ISIS] vehicles, more than 300 fortifications, degrading ISIS's ability to maneuver and defend themselves and the occupied city from the advancing Syria Democratic Forces."

The coalition continues to provide intelligence, surveillance and reconnaissance to support its Turkish partners in the fight against ISIS around al-Bab in northwestern Syria.

"Additionally, the coalition continues to conduct deliberate and dynamic strikes against ISIS targets of the vicinity of al-Bab," Davis said.

"We'll continue to work with Turkey and our partner forces to maximize our efforts in degrading and defeating [ISIS]," Davis said, adding, "We continue to develop plans for greater coordination and support in the operations in and around al-Bab."