Update Required To play the media you will need to either update your browser to a recent version or update your Flash plugin.
By VOA
Dec 14, 2017


In Syria and Iraq, ISIS will soon be history. But even as it struggles to stay alive and relevant, it is critical that it not be allowed to regroup and flourish elsewhere.

“Terrorist groups with safe haven are able to export their violence around the world, striking our homeland and those of our closest allies. We saw al-Qa'ida do this from Afghanistan in the 1990s through 9/11; more recently, we saw ISIS do the same from Iraq and Syria,” said Ambassador-at-Large and Coordinator for Counterterrorism Nathan Sales before a Senate Foreign Relations subcommittee recently.

For that reason, the United States is working with partners in North Africa in order to deny terrorists the ability to operate in the continent's vast spaces where government reach is lacking. 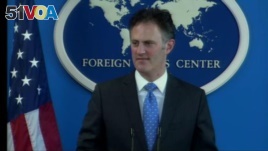 “To mitigate the threat posed by terrorist groups in North Africa, we are helping fragile states build capacity as well as leveraging highly capable states' counterterrorism expertise. We want to develop our African partners' counterterrorism capabilities to a point where they need not rely on assistance from the United States to defend themselves,” said Ambassador Sales.

The United States works with its partner states to improve their ability to investigate, prosecute, and adjudicate terrorism crimes. To stop terrorist travel, we are focusing on improving border security through information sharing at international borders, particularly with regard to known and suspected terrorists.

Our efforts to prevent radicalization and recruitment of individuals into terrorist groups include delegitimizing the violent ideology they espouse. “Countering radicalization in a way that is tailored to each North African country is another critical component of a comprehensive approach to counterterrorism,” said Ambassador Sales.

We undertake these efforts in cooperation with European allies, other key partners, and multilateral institutions to amplify their impact. “The United States uses a range of tools and resources and works closely with the governments of North Africa and other partners to comprehensively address terrorism,” said Ambassador Sales.“Our training and resources are directly assisting partners to disrupt terrorist operations, prosecute terrorist suspects, and protect borders.”