Update Required To play the media you will need to either update your browser to a recent version or update your Flash plugin.
By VOA
Oct 3, 2016


The countries of Africa want partners, not patrons; they want trade, not aid. The United States is determined to be that partner, to accelerate the next era of African growth for all Africans, said President Barack Obama at the 2nd meeting of the U.S.-African Business Forum.

American investment in Africa is up 70 percent. U.S. exports to Africa have surged. In the two years since the last business forum, American and African companies have concluded deals worth nearly $15 billion, which will support African development across the board from manufacturing to healthcare to renewable energy.

The deals and commitments that were announced at this year's U.S.-African Business Forum add up to more than $9 billion in trade and investment with Africa. 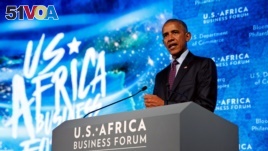 So while progress is being made, it is still only scratching the surface. Despite significant growth in much of the continent, Africa's entire gross domestic product, or GDP, is still only about the GDP of France. And only a fraction of U.S. exports, about 2 percent, go to Africa.

A key to changing this scenario is to increase access to electricity for the two-thirds of sub-Saharan Africans who lack it. Three years after launching Power Africa, large portions of Nigeria, Tanzania, and Rwanda are getting access to electricity. This means than students can study at night and businesses can stay open.

The U.S. and GE just announced a public-private partnership to support energy enterprises managed by women in Africa. "I believe we can bring electricity to more than 60 million African homes and businesses," said President Obama.

In the interest of economic growth, it is critical for African countries to practice good governance. That is what ultimately attracts trade and investment.

If we do all these things, said President Obama, "I know we're going to be able to move our societies and economies forward. And that will be good not just for Africa, but it will be good for the United States and good for the world."