Raid Shows Gains Against al-Qaida in the Arabian Peninsula

Update Required To play the media you will need to either update your browser to a recent version or update your Flash plugin.
By VOA
Feb 3, 2017


The U.S. military carried out a successful raid on the militant Islamist group al-Qaida in the Arabian Peninsula compound in Yemen on January 28. One U.S. Service member was killed and three others were injured in the raid. U.S. forces were instrumental in killing an estimated 14 terrorists and capturing important intelligence that will assist the U.S. in preventing terrorism against its citizens and people around the world, said President Donald Trump.

In an ongoing assessment, the U.S. government has concluded regrettably that civilian non-combatants were likely killed in the midst of the firefight and that casualties may include children. These persons appear to have been caught up in aerial gunfire that was called in to assist U.S. forces as they fought a determined enemy that included armed women firing from prepared fighting positions. 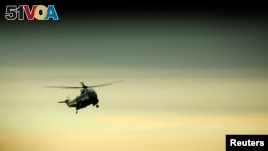 Captain Davis said the terrorist events that the group has claimed responsibility for or been linked to include the targeted and financed attack and massacre on the French newspaper Charlie Hebdo in January 2015, orchestrating complex attacks against Yemen's ministry of defense in 2013, and the attempt to mail explosives to U.S. addresses in 2010.

The group also is connected to attacks on the United States that include the 2013 Boston Marathon bombing, and the attempted underwear bombing aboard Northwest Flight 253 on Christmas in 2009.

“The United States and our partner nations remain committed to eradicating the threats posed by violent extremism and destroying militant safe havens,” Captain Davis emphasized. “We will take measures to combat terrorism, ensuring the safety and security of the U.S. citizens and those targeted by terrorists.”