Update Required To play the media you will need to either update your browser to a recent version or update your Flash plugin.
By VOA
Oct 27, 2017


On October 20th, U.S.-backed Syrian Democratic Forces announced that the city of Raqqa has been fully liberated from ISIS occupation. The terrorist group can no longer claim they have a so-called caliphate.

At the height of its power in late 2014, ISIS controlled about one third of Iraq and about the same in Syria. Since then, it has experienced one defeat after another. In March 2015, the city of Tikrit was liberated. That was followed by Sinjar, Ramadi, Bayji, Hit, Rutbah, Fallujah, Qayyarah, Sharqat, Qaraqosh, Mosul, Hawija, and now, Raqqa. 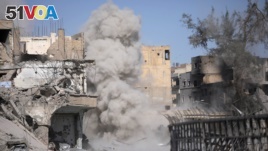 Smoke rises after a landmine exploded as fighters of Syrian Democratic Forces are clearing roads after liberation of Raqqa, Syria Oct. 18, 2017.

Although its false capitals have been liberated, ISIS is not yet defeated. “ISIS is on the run; it is losing credibility, resources and influence every day,” said Pentagon Spokesperson Dana White. “Even as we are fighting and winning against ISIS and other terrorist groups, the threat remains very real.”

Many ISIS fighters bailed out of Raqqa while they still could, and fled south-east, toward two Syrian towns on the central Euphrates River that still remain under ISIS control.

The ISIS strongholds in Syria will soon fall, yet the fight against the terrorist group will remain a global challenge. We are fighting back. In mid-October, a strike on two ISIS training camps in Yemen killed dozens of terrorists, and disrupted their planning efforts, leadership networks and ability to maneuver within the region. On the same day, the self-proclaimed leader of ISIS in Southeast Asia, along with several other militants, was killed in a firefight with the Armed Forces of the Philippines.

“Raqqa has been cleared and it's been liberated, but it's important to remember that the fight continues,” said Pentagon Spokesperson Dana White. “We're fighting ISIS around the world, as well as other affiliated groups. So we will continue to fight.”