Readying for the Next Step in Liberia

Update Required To play the media you will need to either update your browser to a recent version or update your Flash plugin.
By VOA
Sep 27, 2017


Liberia has come a long way since the end of its second civil war in 2003. Since then, the economy grew by more than 7 percent per year, per capita income rose by nearly nine-fold, and life expectancy went from 53 to 61 years.

Liberia also made notable progress toward democracy. “This includes the nurturing of a vibrant media and active civil society; civil service and public financial management reforms; and the rehabilitation of infrastructure,” said USAID Acting Assistant Administrator for Africa Cheryl Anderson. 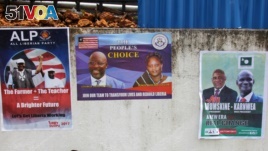 Picture in Monrovia shows campaign posters on a wall as the campaign kicks off for the presidency and House of Representatives elections in October.

Over the past 10 years, the United States, Liberia's largest bilateral donor, has dedicated significant resources to help Liberia remain on a path of democratic governance and stability.

“Our programs in Liberia address the underlying structural and institutional problems that gave rise to fourteen years of civil strife and war, while at the same time tackling the country's more immediate development needs,” said Assistant Administrator Anderson.

On October 10th, Liberians will go to the polls to elect a new government. It is an historic election, because if it is successful, it will result in the country's first peaceful democratic transition in more than 70 years. It also will mark a critical milestone in Liberia's progress toward a stable democracy.

However, Liberia's National Elections Commission is facing a number of challenges that could complicate the elections, said Donald Yamamoto, Acting Assistant Secretary, of State for African Affairs. This includes poor infrastructure, inadequate funding, and heavy rain that could complicate election logistics.

“We are providing comprehensive programming support to the Liberian National Elections Commission, civil society organizations, and media outlets in the run-up to the 2017 elections. In addition, our Ambassador is meeting with candidates running for president to emphasize the importance of peaceful elections, and a transition in government that builds upon the progress made in the last 12 years,” he said.

“This election is critical, not just for what the transition represents but because it will give Liberians the opportunity to elect a President well-equipped to lead the country towards a peaceful and prosperous future,” he said.

“We look to Liberia's election as another positive step forward for democracy in West Africa.”