Update Required To play the media you will need to either update your browser to a recent version or update your Flash plugin.
By VOA
Aug 2, 2017


The Iranian people's right to religious freedom continues to be violated. 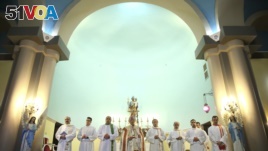 Since June, a revolutionary court in Tehran has issued long prison sentences to at least 11 Christian converts, as well as the former leader of the Assyrian Pentecostal Church in Iran. They were found guilty of crimes against national security after trials that lacked basic due process. Among the eleven are Pastor Youcef Nadarkhani, sentenced to ten years for organizing house churches and preaching what the authorities referred to as “Zionist Christianity,” and Victor Bet Tamraz, former leader of Iran's Assyrian Pentecostal church.

According to the Center, “The Christian community, particularly its convert community, faces systematic state persecution and discrimination.”

The Center also reports that in July, the Council of Sunni Theologians of Iran which represents clerics based in the country's northwestern Kurdish-populated provinces, suspended operations “in response to the ongoing climate of intimidation and fear perpetuated by the Intelligence Ministry.”

Sunnis are the largest religious minority in Shia-majority Iran, and are subject to harassment and persecution by authorities.

Baha'is are not a recognized religious minority under the Iranian constitution and are subject to regular harassment, interrogation, and arrest. Iran has imprisoned seven leaders of the Baha'i community since 2008. The government uses anti-Baha'i rhetoric in official statements, and authorities discourage the employment of Baha'is and frequently restrict or shut down their businesses.

Additionally, the Center reported that an imprisoned dervish of Iran's Sufi Gonabadi Order, Mohammad Ali Shamshirzan, who suffers from heart disease, is being denied medical treatment outside the prison, despite his deteriorating condition. Sentenced to life in exile in Bandar Abas for the purported crime of “belonging to a deviant sect,” Mr. Shamshirzan has been held in prison since January 2017. Also, in July, authorities blocked access to websites belonging to the Gonabadi Order, so that, according to the Order's lawyer, its presence in cyber space will be erased.

Earlier this year, Vice-President Mike Pence stated that “Protecting and promoting religious freedom is a foreign policy priority of the Trump administration,” and insisted the United States will speak up for all those persecuted for their beliefs:

“Since the founding of our nation, America has stood for the proposition that the right to believe and the right to act on one's beliefs is the right of all peoples at all times.”

Under President Donald Trump, Mr. Pence said, “America will continue to stand up for religious freedom of all people, of all faiths, across the world.”