Update Required To play the media you will need to either update your browser to a recent version or update your Flash plugin.
By VOA
Jun 28, 2017


“The refugee situation in Uganda has reached crisis proportions,” said U.S. Ambassador to Uganda Deborah Malac. In remarks to the Uganda Solidarity Summit on Refugees, she warned, “To prevent a broader humanitarian disaster, the response of Ugandan authorities and the international community must address three interconnected issues. First, we must collectively meet the needs of the refugees themselves so they can live in safety and dignity. Second, we must address the needs of local hosting communities to support their resilience. Finally, we must stop the main driver of this refugee crisis – the ongoing conflict in South Sudan – that has displaced millions with hundreds of thousands seeking safety in Uganda.”

The U.S. government's participation in the summit reinforced the U.S. commitment to the 2016 New York Declaration for Refugees and Migrants, which demonstrated the unity of the international community in humanitarian efforts to save lives, protect rights, and share responsibility on a global scale.

“The United States” Ambassador Malac noted, “is the single largest donor in the affected areas of Uganda, and as conditions have worsened, we have increased our contributions significantly.” Since October 2016, the U.S. has provided nearly $154 million for humanitarian assistance, including $57.4 million announced by President Trump on May 24th, and the U.S. remains committed to providing such support. 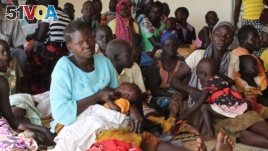 However, said Ambassador Malac, more resources and commitments from both the Government of Uganda and the international community are needed. “Ugandan authorities have demonstrated leadership in their treatment of refugees, but given the overwhelming numbers, they must begin to do more to protect this population. In particular, the [Ugandan] Government needs to provide more security personnel in settlement areas, where there are growing reports of violence, especially against women,” she said.

“Finally,” she emphasized, “there can be no beginning to a resolution of Uganda's refugee crisis without a lasting and durable political solution to the conflict in South Sudan. [Neighboring countries] and the international community cannot be expected to bear this burden indefinitely because of the unwillingness of the parties in South Sudan to end the violence.”